There is a bit of pre-launch publicity for DIPG Information Booklet in the Scotland on Sunday today.  The booklets are at the printers and the plan is to hand-deliver copies to 16 hospitals in week commencing 19th September. 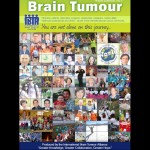